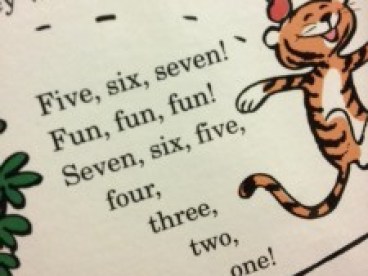 I don’t need to look at the pages any more.

I planned to write a post for each month of Liam’s first year, so I wouldn’t forget anything. Turns out that what you need takes precedence over what you want once a baby shows up, and that need is often sleep or food or quietly thumping your forehead on your desk at 3am as you try to use Jedi mind tricks to stop the crying in the nursery*.

I started this post two months ago, intending to have it up when he turned 5 months old. Then I came back to it last month and went for the 6 month deadline. Third time’s a charm, but I’m not sure how coherent all of this will be, because it was written and edited in bits and pieces, mostly in the very early morning. (TL:DR summary: Liam is 7 months old. He’s a lot of work, but he’s pretty cute. We’ll keep him.)

He found his own feet somewhere around 5 months and has barely let them go since then. Every diaper change, without fail: pants come off, legs fly up and feet go in mouth. But everything goes in mouth now. Mommy’s hands, Daddy’s collar, toys, remotes, everything within reach. We’re having to watch him a lot more closely.

Not too closely, though, because he’s not rolling or crawling. I know he can roll front-to-back and back-to-front, because I saw him do both around 5 months. But he doesn’t want to do either any more. When he’s on his back he’ll sometimes roll partway over to grab at a toy, but he mostly lies there and kicks like mad. He’s just figured out sitting in the past couple of weeks, and he loves being upright, but he still topples over a lot thanks to his giant melon head. 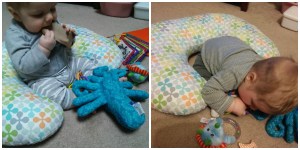 And down he goes.

He loves his jumperoo and would bounce for an hour in that thing if we let him. He’ll bounce in your lap, too – he can be exhausted, whining, and rubbing his eyes, but stand him in your lap and those legs can’t help themselves. 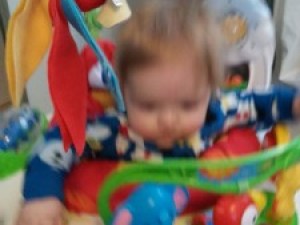 As much as he’s stubbornly stalled in some of the physical milestones, this kid is seriously determined to talk. He will flap his arms to get your attention and then tell you stories for half an hour, hardly stopping to breathe. He talks to himself at night, he chatters during car rides, and he gives very long-winded speeches during diaper changes. Don’t you look away or try to interrupt – he’ll just talk louder. He also loves music, singing, and dancing, and will go quiet and listen whenever I put on a Cookie Monster song or a Doubleclicks video.

He’s good at smiling. Also good at whining, which is new and really irritating. He’s starting to get upset if we walk away, which makes my mornings very difficult. I’m getting good at making coffee and brushing my teeth while holding a baby in one arm. Also getting good at drinking coffee at weird angles so he can’t grab the cup.

We’re slowly working towards better nighttime sleep, but every second or third night is still full of wake-ups and feedings and fussiness. The nights in between are wonderful 6-hrs-at-a-stretch nights, though, and I’m hoping those get more frequent. He’s learning. We haven’t tried any real “sleep training” except to try and get a consistent routine going and to leave him in his crib longer when he wakes up, to see if he can get back to sleep on his own. And he sometimes does, so I have hope for our future.

Breastfeeding is still going great, even though I’ve had to start supplementing with formula to keep up with his appetite. I thought it would be hard. I thought it would hurt and I’d hate pumping. When he was born I told myself I owed him the effort, and I’d try for at least a month. And then it wasn’t nearly as traumatic as I feared. He latched well (most of the time), and it didn’t hurt after the first couple of weeks. Where I thought I’d resent being needed as a food source 24/7, instead I found that I enjoyed our nursing time together. I decided I’d keep at it until it was time to go back to work, and then maybe I’d try pumping for a week. I did a week. Then a month. And here I am, at 7 months, still doing it. I’m not sure how much longer I want to do it, but I feel like I’ll miss it once we stop.

He started solid food at the 6-month mark, and now he goes at it like he’s training for a competitive eating championship. He’s had rice and oatmeal cereals, peas, green beans, carrots, zucchini, potatoes, sweet potatoes, avocado, banana, apples, peaches, and pears. He’s also making num-num hungry-guppy faces every time he sees us eating, and taking serious swipes at whatever we’re having if it’s within reach. Juice and pretzels fascinate him and he’ll twist all the way around in my lap to watch them go in my mouth. He still can’t grip little bits of food, so for now we’re giving him a mix of jarred/packaged (it comes in little plastic boxes nowadays!) and homemade purees and mashes. 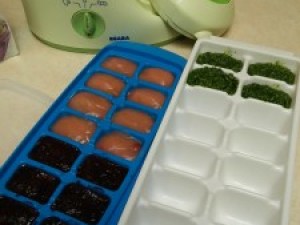 I would have liked to do all homemade stuff because it’s so much cheaper, but the prepared stuff is easy and fast. And once we’re into mixing flavors, I’m not going to be putting together my own kale-mango-quinoa blends for him. I’ll let Gerber and BeechNut have fun with that.

He’s adjusted well to being at daycare every day, and I’ve adjusted well to being away from him every day. I still have occasional pangs of guilt about it, especially with my hour-long commute getting me home only an hour before his bedtime, but I’m very happy with the provider we found. She has a small gaggle of other kids under her watch, but she handles them so well and I never worry that Liam’s being left on the floor to cry. She’s much more of a Fräulein Maria than a Captain Von Trapp. I don’t know how she does it. I’m confident he’s in good hands there. And he’s also sort of a big deal at his daycare. As soon as we’re through the door in the morning, we’re greeted by shrieks of “It’s Liam!! Liam Liam!!” from his fan club stampeding towards him. It’s adorable. 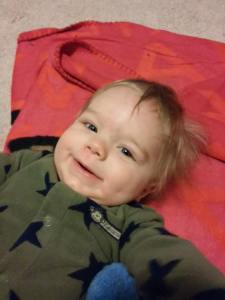 He’s had his first Halloween, his first Christmas, his first snow… My little guy is growing up so fast and I’m afraid to blink. 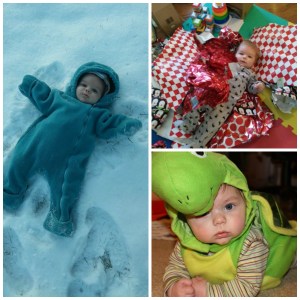 *Mind tricks don’t work on him. So either he’s a Hutt or I need to go back to Dagobah for more training. Examination of his leg rolls indicates the former is a strong possibility.