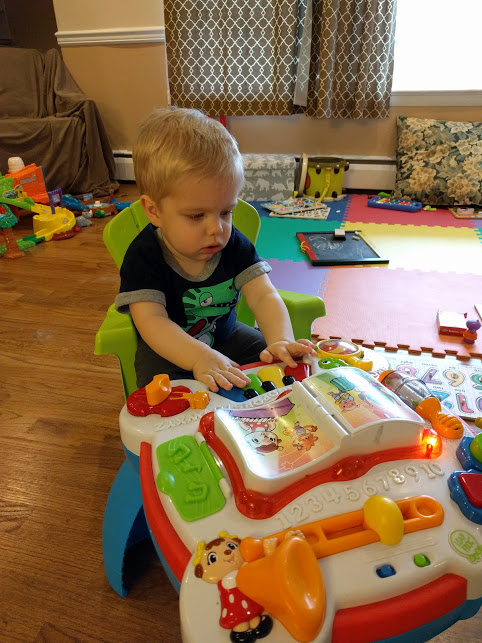 It’s weird to keep counting age in months, and I know moms are made fun of for doing it, but it’s such a weird place to be, in between one-and-a-half and two. Neither one of those fits, because he was someone else at 18 months and he’ll be completely different all over again by 2.

So much has changed since my last update. He took his first independent steps at Grandma and Pop’s house, carefully carrying my travel mug full of coffee from one side table to another. He didn’t realize he’d done it, but my mother-in-law and I looked at each other with huge incredulous eyes and then spent the next ten minutes handing him other things to carry around. He toddled happily from one adult to another, carrying balls and books, for an hour. Lots of cheering, a little crying, and a page turned. 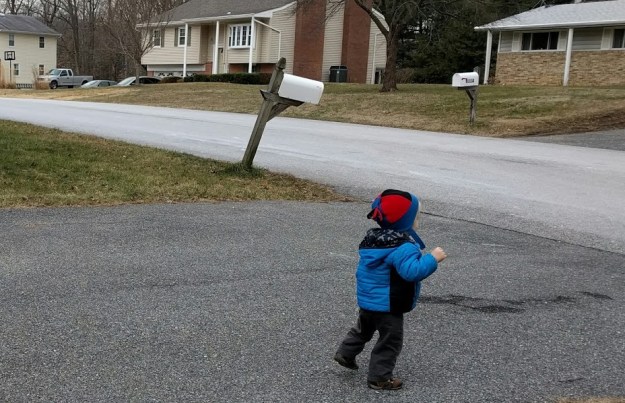 Only a couple weeks later, he figured out how to stand up in the center of the room without pulling up on anything, and he was suddenly excited about walking. We walk into school together from the parking lot in the morning, and back out to the car in the afternoon. I hold his little hand and we move in literal baby steps. If I’m in a hurry and try to scoop him up, he protests, pointing to the floor and thrashing in my arms. He must walk, and stop to point out everything on the way. He bends to point out red squares in the tile floor. He points to the radio on the counter and signs for music. He yells DUCK and SHEESHEE at the seagull and fishies on the school mural, then shows me his fish face, says “mama?” and waits for me to do it back. Once we get outside, it’s CAR! Ight? Udda ight? As he points to a car’s two headlights. And if he turns and catches sight of the school’s name on the wall, he’ll waggle his music finger and say “ee-eh-geeee” to tell me there are letters there and I better start singing about it immediately.

Speaking of singing, every drive turns mama (or daddy) into a music player set on shuffle, as we try to figure out what his song of the day is. Wheels on the bus? No. ABCs? No. Sometimes he helps and gives us a hint – wiggling his fingers for the “shishy bishy” spider, or mumbling “uppabudda (world so high)” for Twinkle Twinkle. But mostly it’s trial and error with a music critic in the back seat yodeling nooOOOoooOOO after the first three notes of every wrong song, and giggling and clapping when we get it right. Then it’s “ah-hehn” because we need to do it again. And again. And again.

We have a similar issue with books, and it’s frustrating to have so many wonderful and beautiful books around that he just yells at and slams shut after the first page. He still loves reading. He races to the book bin to grab a favorite before backing into us to sit in our laps and read. But we’re down to about a dozen that he’ll actually tolerate all the way through. I thought I had the solution when I went to a consignment sale and bought other books in the same series as ones he’s really into, but he’s no idiot. It’s not that easy to trick a toddler, you guys. The first time he opened up a Pigeon book that didn’t start with the driver saying “Hey, Pigeon, why don’t you show me your happy face,” he gave me a withering glare, put his hands on his hips and said “anny” to show me he was just as angry as the pigeon who refuses to take orders from a bus driver. 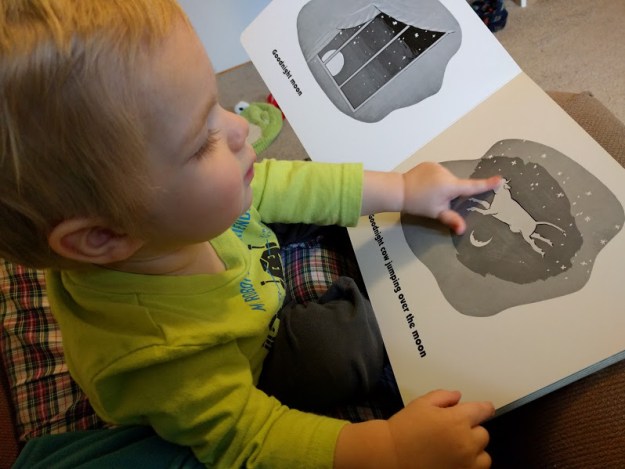 His language has absolutely exploded lately. He understands so much that we’ve had to start being careful with important words. If we say “bath,” he’s at the stairs within seconds, yelling FAFF FAFF FAFF and trying to pull his shirt off. He likes repeating the names of family members, and he’s just figured out his own name: L’mm. It’s the cutest. About a week or two ago he started stringing two words together. First “uh-oh duck” to tell us the garden duck had fallen over, but soon after that he was doing “hi Daddy” when Dave walked into a room and “byebye Ah-mull” waving at the cat (Animal) on his way out the door to daycare. He uses “other” to make two-word phrases a whole lot now, too. While putting shoes on: udda feet? Taking his coat off: udda ahmm? Poking mama in the eyes: udda eye?

Taking turns is a huge right now. If I kiss him, he’ll immediately lean over towards Dave and say “Daddy? Daddy? Until Dave kisses him too. Then he’ll grab my shirt and yank me towards Dave saying “Mamadaddy. Mamadaddy,” insisting we kiss too. Same goes for high fives (yeah!) and fist bumps (boom!) – it’s not over until every permutation of the fists or palms present in the room has been tried. This includes self-fives. Toddler self-fives are super cute, folks.

Eating is still a struggle, with a very limited set of acceptable foods that seems to change without any good reason. This week’s huge hit has been pineapple, which he’s hated for months and will probably hate again by next week. I’m trying to be cool about it and not force foods on him, just have things available close by for him to try if he wants to. It’s working fairly well – he’s tasted garlic french fries, a cheeseburger, an italian sub, honey mustard dressing, an egg sandwich with pepperjack cheese, BBQ chicken pizza, and tortilla chips in the past week. And he voluntarily licked a spoon that had been dipped into a Chipotle carnitas burrito bowl. He spit all of it out, and the display of dislike involved weird hissing sounds and dramatic wiping of his tongue with his hand, but he’s at least tasting things. 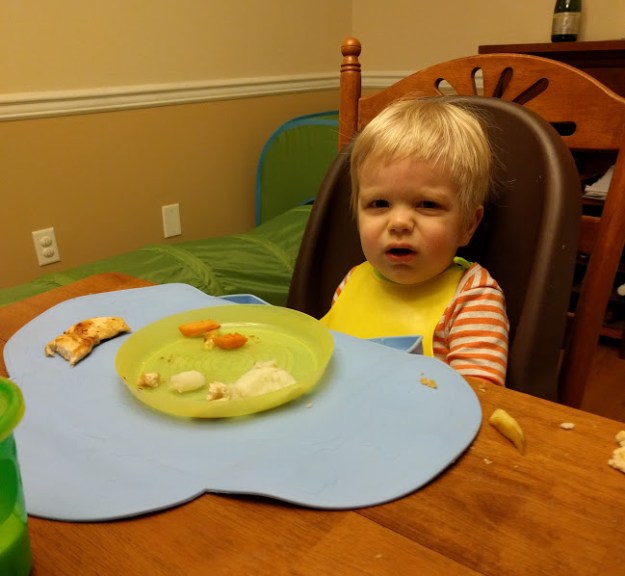 This post wouldn’t be honest if I didn’t write about the tantrums. Because those have started. It’s not horrible yet, but he’s definitely developing opinions and he’s sharing them. There’s a lot of general low-level whining when we can’t figure out what he wants when he’s pointing and babbling, but every few days something bigger takes over and he gets mad. He’s started to throw his toys in frustration and anger, and the silliest things set him off. I guess that’s just toddler life, but it’s weird to see our mellow little guy crying in frustration when we won’t let him ride his trike when it’s time to get in the car for daycare. Or when it’s time to go inside after a wagon ride. Or when he can’t play with a knife. Or can’t have a third serving of pound cake. He’s just learned to stomp his feet, too, so it’s about to get even more interesting. 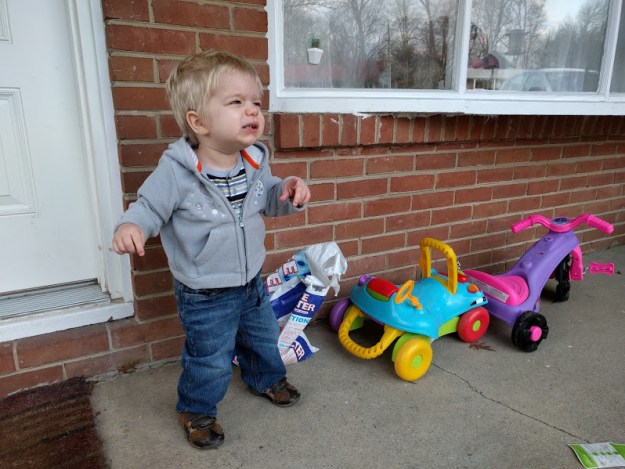 But it’s mostly still good times, overall. He still loves music and is very gentle when Dave hands him the ukulele to let him try it. He loves the real piano at Grandma and Pop’s, and also loves to take a tour of the wind-up music boxes in their living room so he can dance. He’s getting exposed to lots of different styles of music thanks mostly to Dave’s eclectic tastes, but for now Elmo singing the alphabet is still tops on his list.

As he’s growing up, he’s getting better at understanding instructions and interacting with us in more meaningful ways. He participates in getting dressed and undressed now, putting his arms in sleeves, pulling off socks, and naming body parts as he goes. He climbs the stairs on his own, and he loves throwing trash out (we’re still trying to teach him that not everything is trash). Our conversations actually communicate information in two directions now, and that blows my mind. 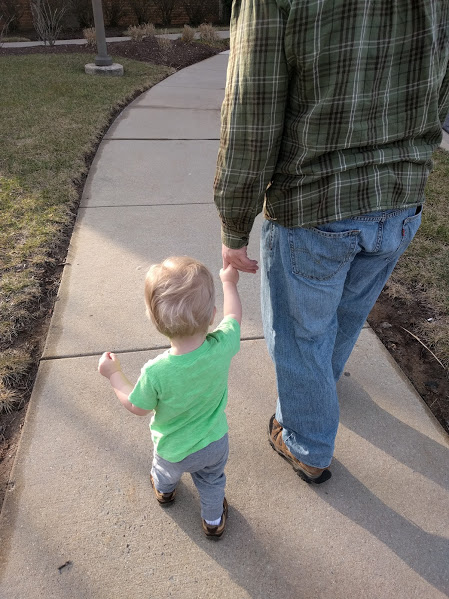 I think the next few months are going to be wild. I’m looking forward to them.

*Originally posted as 22 months because I apparently can’t count. I keep this blog real, folks.

One thought on “Liam at 21 months”